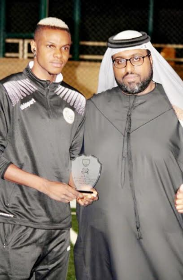 Allnigeriasoccer.com has been told that United Arab Emirates Pro League club Shabab Al-Ahli Dubai FC have completed the signings of Nigerian duo Olamilekan Kujimiyo and Chinedu Obi Michael following the issuance of their International Transfer Certificates by the Nigeria Football Federation.
The two players have put pen to paper on two-year deals until December 2021 following a successful trial period.
Michael is a striker born on August 23, 2000, while Kujimiyo is a midfielder born on June 19, 2000.
The two players were invited to train with Belgian First Division A teams Standard Liege and Racing Genk prior to their trip to the United Arab Emirates but the proposed deal fell through after they were not issued visas by the Belgian authorities.
The Sidos Academy products trained with the Flying Eagles ahead of the 2019 FIFA U20 World Cup but didn't make the final roster simply because they were not playing abroad.
The deal taking Michael and Kujimiyo to Shabab Al-Ahli Dubai FC was brokered by Jim Dickson, President of Sidos FC Lagos and Dominic Egbukwu.
Ifeanyi Emmanuel