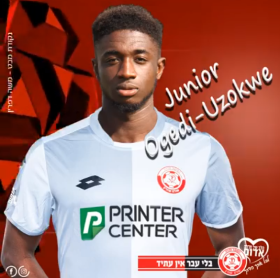 Israeli Premier League club Hapoel Hadera have officially announced the capture of London-born Nigerian striker Junior Ogedi-Uzokwe following a successful medical.
The 26-year-old ended his association with League Two club Colchester United after inking a five-month deal with Hapoel Hadera on Tuesday, February 4.
The Israeli top-flight club have an option to extend the agreement between the two parties for another season.
Ogedi-Uzokwe landed in Israel this past weekend and watched his new teammates register a 1-0 victory over Sektzia Nes Tziona, with Super Eagles goalkeeper Austin Ejide in between the pipes for Hapoel Hadera.
In his first words as a player of Hapoel Hadera, he said : " Hadera looks like a good family group to me. I was very impressed by the people here, and I can't wait to wear the shirt of the group and help her on the field".
On his curriculum vitae, Ogedi-Uzokwe lists Leyton Orient, Millwall, Hayes & Yeading United, Türk Ocagı Limasol, Bromley and Derry City among his previous clubs.
Igho Kingsley