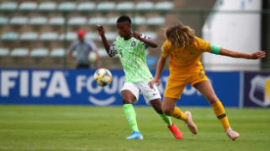 Allnigeriasoccer.com can exclusively report that Nigeria U17 captain Samson Tijani has ended speculation about his future after signing a multi-year contract with Austrian Bundesliga champions Red Bull Salzburg.
Tijani's five-year deal with Red Bull Salzburg will start running with effect from June 2020 when he would have attained the age of majority, and expires at the end of the 2024-2025 season.
A host of clubs based in Spain, England, Belgium, Denmark, Brazil, Italy and Portugal including FC Midtjylland, Clube Desportivo Feirense, Anderlecht, Napoli and Santos had explored the possibility of signing the central midfielder before he inked a pre-contract with Red Bull Salzburg.
Red Bull Salzburg had been on his trail since the 2019 FIFA U17 World Cup, where he was one of the few Golden Eaglets players that left the tournament with their reputation intact despite the five-time world champions failing to advance to the quarterfinals.
He picked up the official Man of the Match award for his efforts in the 4-2 win against Hungary in the group stage.
Tijani has successfully passed his medical examinations with Red Bull Salzburg and the Austrian champions are planning to announce his transfer even before the summer transfer window opens for business.
Tijani's present club in Nigeria, Collins Edwin Sports Club are entitled to training compensation for the deal taking him to Red Bull Salzburg.
Ifeanyi Emmanuel
Photo Credit : fifa.com