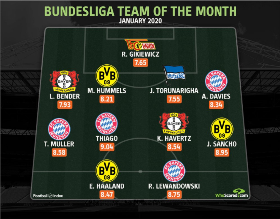 Nigerian Federation target Jordan Torunarigha was outstanding for Hertha Berlin in the month of January 2020 and has been rewarded with a spot in Whoscored's Bundesliga Team of the Month.
The Hertha Berlin number 25 forced his way into his team's starting line-up last month, going the distance in all the three matches they contested against Bayern Munich, Wolfsburg and Schalke, and helped goalkeeper Rune Jarstein to keep a clean sheet in the latest league match.
Torunarigha found game time hard to come by in the first half of the season, logging only 91 minutes from a possible 1,530, so much so that he was linked with a departure from Hertha Berlin in the January transfer window.
In a 4-4-2 formation, the former Germany youth international was partnered in central defence by Germany's World Cup winner Mats Hummels.
Torunarigha, who had a rating of 7.55, was the only Hertha Berlin player selected in the Team of the Week.
The 22-year-old has scored two goals in eight appearances across all competitions for Hertha Berlin's first team this season.
Igho Kingsley