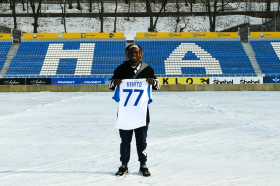 With a statement on their official website, Ukrainian Premier League side Dynamo Kiev have announced that they have completed the signing of Nigeria U23 international Muyiwa Olabiran following a successful medical.
The Abidjan-born winger has put pen to paper on a three-and-a-half-year contract, tying him to the Kievites until the end of the 2022-2023 season.
For the remainder of this season, he will play with the number 77 jersey at Dynamo Kiev.
Nicknamed Benito, he is comfortable playing on both flanks as well as the center forward position.
"I feel best on the right flank because I am a left-handed player and can easily apply dribbling, move and attack on the right,'' said Olabiran.
On his ambitions at Dynamo Kiev, he said : "I can say for my part that I will do my best to help the team win every game and take a decent position on the results of the season.
"I also know that Dynamo continues to fight for the Ukrainian Cup, so I want to assure the fans that I will do my best to strengthen the team".
Muyiwa Olabiran lists Saxan Gagauz Yeri (Moldova), Lokomotiv Tashkent (Uzbekistan), Luch Minsk (Belarus) and Tambov (Russia) as his previous clubs.
Ifeanyi Emmanuel
Photo Credit : fcdynamo.kiev.ua