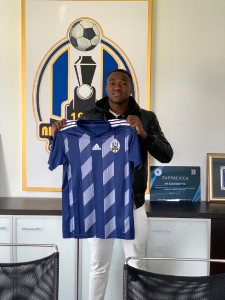 Through a press release published on their official website, Croatian Prva HNL club NK Lokomotiva Zagreb have announced the signing of Nigeria U20 international Ibrahim Aliyu on undisclosed terms.
Nicknamed Bravo in his homeland, the 18-year-old has joined Lokomotivia Zagreb from Nigerian club Oasis .
He will initially play for Lokomotivia Zagreb's youth team for the remainder of the 2019-2020 season as he acclimatizes and adapts to his new environment.
Bravo was a member of the Flying Eagles squad to the 2019 U20 Africa Cup of Nations, making four starts against Burundi, Niger, Mali and South Africa during the tournament in Niger but was dropped from the World Cup roster.
After 21 matches in the Croatian top-flight, Lokomotiva Zagreb occupy the fifth position in the standings with 31 points.
They finished second in the Prva HNL at the end of the 2012-2013 season.
Igho Kingsley
Photo Credit : nklokomotiva.hr