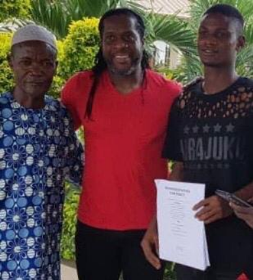 Allnigeriasoccer.com understands that a high-ranking board member of the Nigeria Football Federation based in Lagos coerced Red Bull Salzburg bound Golden Eaglets skipper Samson Tijani into terminating his representation agreement with London based intermediary, Tim Lekan Aleshe.
Tijani and his father, Bashiru Oguleke Tijani signed a representation contract dated May 6, 2019 with Aleshe and the contract would have expired in 2021 but the existing contract was unilaterally terminated by the player and his father.
The defensive midfielder's international passport was seized by a proxy acting on behalf of a Nigerian Federation chief shortly after the Nigerian squad arrived in Lagos from Brazil to prevent the player from traveling abroad without his knowledge.
Few days after Tijani arrived in Lagos, Mr. Aleshe received a letter with subject matter, 'Invalidity/Termination of Representation Contract between Okikiola Tijani Samson and Tim Aleshe', and the English Football Association were notified to delete the representation contract on the Intermediary Matching System (IMS).
Tijani and his camp argued that the contract was terminated on the grounds that the player was not eligible to play for a club in England and it was impossible for the player to be bound by the English FA regulations, as the player is a Nigerian footballer playing football in Nigeria.
Former Nigeria defender Danny Shittu, Tim Aleshe and Emmanuel Adewole had been negotiating with Red Bull Salzburg over the transfer of Tijani before the representation agreement was unilaterally terminated.
As previously reported by this website, a top NFF official based in Lagos, Dotun Coker, who is the Chairman Technical Committee Lagos State Football Association, Siji Lagunju of the NFF Technical Department and Chief Joseph Uzoma Ebowusim will receive monetary payments for the transfer of the defensive midfielder.
Ifeanyi Emmanuel