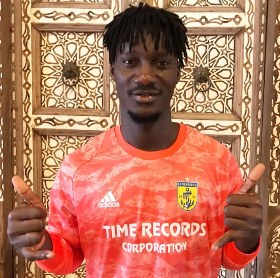 Latvian top-flight club FK Ventspils have announced through their official website the signing of 2013 FIFA U17 World Cup-winning goalkeeper Dele Alampasu on undisclosed terms.
Allnigeriasoccer.com can exclusively report that Alampasu's contract with FK Ventspils is for three seasons, keeping him at the club until December 2022, and has asked for the number 12 jersey.
Commenting on his transfer to FK Ventspils, the former Feirense glovesman told the club's official webpage : "When I got an offer from Ventspils, I thought it was imperative to take such a great opportunity.
"This is a great opportunity to take it to a new level and get to know the European competitions, which has always been my goal.
"I know that FKV is always playing on the international scene, and that leaves a huge impression.
"Honestly, I was shocked to learn that Ventspils had already played in the Europa League Group Tournament - a very high level! I want to repeat such a club achievement!

"Of course, the most important goal is to win the Latvian Championship. It is a difficult task, but you just have to set it up.
"I see that all the guys in FKV are in the mood to win, all are ambitious and want to succeed. I like the atmosphere here as a family - everyone supports each other. It helps me a lot!"
The 23-year-old Alampasu could make his competitive debut for Ventspils when they face Rīgas FS in their league opener on March 15, 2020.
Ifeanyi Emmanuel