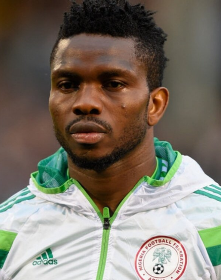 Nigeria's 2002 World Cup coach Festus Onigbinde has insisted that newly appointed Super Eagles assistant coach Joseph Yobo was a brilliant footballer during his playing days but that does not guarantee him success in the dugout.
To drive home his point, Onigbinde cited Pele and Franz Beckenbauer - two of the best players that graced the game - but were forced to end their coaching careers prematurely, while Jose Mourinho, one of the best coaches in the world, enjoyed limited success as a footballer.
"Pele and Franz Beckenbauer wnet into coaching and had to pull out and those are two of the best players the world has produced," Onigbinde said in an interview with Nigeria Info FM's Bunmi Haruna monitored by allnigeriasoccer.com.
"There is a difference between being a player and being a coach. Somebody with PhD in Mathematics may not be able to transfer the knowledge to people if he doesn't have the methodology.

"Mourinho is a good coach, in which national team did he play? Yobo is a fantastic player, he was one of the pillars in my defence in 2002.

"If people who employed him are convinced he has gained knowledge and experience as a coach, I am not aware of that."
Onigbinde pointed out that Yobo does not have the coaching experience and added that the Nigerian Federation have a reason for appointing the former Everton defender as an assistant coach.
"We all know the process of employment anywhere in the world, are they employing him as a player or as a coach?
"Which experience are they talking about, is it experience as a coach or experience as a player? I wish Nigeria the best of luck.

"Do you agree with me that there's a difference between being a good coach and a good player.
"Yobo was part of my World Cup team in 2002, so I know him as a very strong dedicated player but I have not seen him as a coach. The people who employed him must have had their reason for employing him."
When asked to highlight the difference between the appointment of Sunday Oliseh and Yobo, Onigbinde answered : "When Sunday Oliseh came in, he was a fantastic coach with brilliant success.

"Yobo was very close to me when he was playing in my team, so I wish him the best of luck. I am not criticizing his employment.

"People who appointed him must have ensured that he has relevant qualifications. I am not saying he is not qualified, that's between him and his employers''.
Ifeanyi Emmanuel
Photo Credit : thenff.com