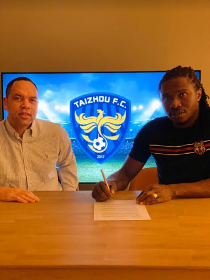 Nigerian striker Daniel Chima has bid farewell to Norwegian outfit Molde, this time on a permanent basis, after sealing a move to Chinese club Taizhou Yuanda.
Allnigeriasoccer.com can exclusively report that Chima's contract with Taizhou Yuanda will keep him at the second-tier team until December 2021, having put pen to paper on a two-season deal, and has been allocated the number 27 jersey for the upcoming campaign.
The 28-year-old spent the whole of the 2019 season on loan at Heilongjiang Lava Spring, for whom he scored 14 goals while producing two assists.
To date, Chima has enjoyed the most successful period of his career in terms of goals scored and trophies won at Molde under the guidance of Ole Gunnar Solskjær, who is now coaching Manchester United, contributing to 56 goals (35 goals, 21 assists) in 122 games while the Norway legend was in charge of Molde.
A product of Festac Sport, he lists Lyn Oslo, Shanghai Shenxin and Legia Warsaw among his previous clubs.
Chima departs Europe after appearances in the qualifying rounds of the Champions League and Europa League.
Ifeanyi Emmanuel