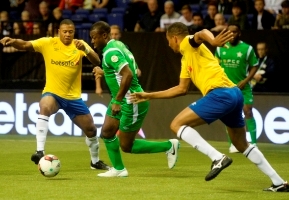 Football statistics website Whoscored.com has published a list of the top five youngest players to score hat-tricks in the UEFA Champions League, with a Super Eagles legend, Yakubu Aiyegbeni making the cut.
Yakubu achieved the feat on September 24, 2002, scoring all the goals in Maccabi Haifa's 3-0 rout of Olympiakos, aged 19 years and 306 days.
The former Nigeria international went on to score two more goals in the Champions League that season - against Manchester United and Olympiakos.
Overall, Yakubu made five appearances in total in the Champions League proper and a further four in the qualifying rounds of the competition.
The youngest player to score a hat-trick in the Champions League is former Real Madrid striker Raul, who was aged 18 years and 114 days on October 18, 1995.
Real Madrid's Rodrygo is second on the list at 18 years and 301 days, followed by Wayne Rooney (18 years and 339 days), Erling Haaland (19 years and 58 days) and Yakubu.
Ifeanyi Emmanuel
Photo Credit : starsixes.com