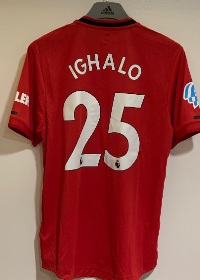 Nigerian attacker Odion Ighalo is among the substitutes for Manchester United in their ongoing game against Chelsea at Stamford Bridge.
Although the Shanghai Shenhua loanee only met and trained for the first time with his new teammates on Sunday, manager Ole Gunnar Solskjaer has not ruled out the possibility of introducing him off the bench.
The Norwegian football tactician revealed that Ighalo caught the eye in his maiden training session and scored some goals.
Speaking to Sky Sports just before the start of the game, Solskjaer said : "He's a box player, he can score goals and I'd rather be 3-0 up and put him on than needing to put him on to put pressure on Chelsea.

"So let's see if he is needed, he's had a session with the boys yesterday, he scored a few nice goals (in training) so hopefully he can just improve on that".
Ighalo is among four attack-minded players on the United bench, the others being Juan Mata, Mason Greenwood and Andreas Pereira.
Igho Kingsley
Photo Credit : manutd.com