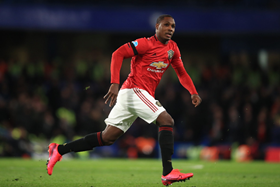 Former Nigeria international Odion Ighalo responded admirably to a jibe from one Chelsea fan on Monday night when his new on loan side Manchester United defeated Chelsea 2-0 away at Stamford Bridge, according to Express UK.

As the top scorer at the 2019 Africa Cup of Nations with five goals was about to be introduced in his first United game in the 85th minute, Ighalo overheard a Chelsea saying "go back to China."

The 30-year-old striker who was handed the number 25 jersey simply turned and beamed a smile at him.

Ighalo had some good touches of the ball but missed a good chance to score when he fired a shot straight at goalkeeper Willy Caballero.

Interestingly prior to the match, manager Ole Gunnar Solskjaer revealed that the loan deal of the Nigerian could be made permanent afterwards.

The win took United to 7th place in the Premier League table with 38 points, three points adrift of Chelsea.