...the complete Nigerian football portal
Subscribe
The Reason Chelsea Hero Mikel Will Not Be Included In Trabzonspor Squad List Vs Besiktas
Published: February 18, 2020 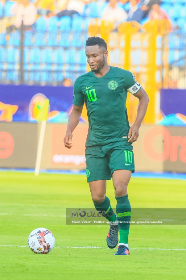 Chelsea and Super Eagles legend John Obi Mikel will certainly not be included in Trabzonspor's matchday eighteen for their upcoming Super Lig clash against Besiktas, allnigeriasoccer.com reports.
The defensive midfielder was cautioned in the closing minutes of Trabzonspor's 2-1 win against Sivasspor last weekend, thus triggering a one-game suspension.
Mikel's 91st minute yellow card, which was shown to him for a foul on Mert Hakan Yandas, was his fourth in a domestic match this season.
He was earlier cautioned in the reverse fixture against Besiktas in September, before receiving further bookings against Rizespor and Konyaspor.
Since joining Trabzonspor on a free transfer last summer, Mikel has appeared in 24 matches across all competitions, logging 1,771 minutes.
Trabzonspor lead the way in the Turkish Super Lig standings with 44 points from 21 matches and have played one game less than second placed Istanbul Basaksehir who are on 43 points.
Ifeanyi Emmanuel