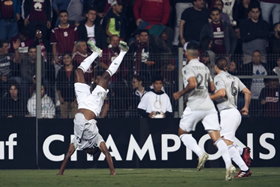 Nigeria U23 international Orji Okwonkwo was on target in Thierry Henry's first official game in charge of Canadian club Montreal Impact on Thursday morning, allnigeriasoccer.com reports.
Costa Rican team Deportivo Saprissa came from two goals down to salvage a 2-2 draw with the Canadian champions in a CONCACAF Champions League tie at Estadio Ricardo Saprissa Aymá in San José.
Okwonkwo scored a massive away goal for the visitors in the 12th minute, burying a rebound after Bojan's effort was blocked, before Quioto doubled the advantage ten minutes later.
Deportivo Saprissa were more adventurous in the second half and were rewarded with late goals from Venegas and Rodríguez.
Okwonkwo had to be replaced by Argentine striker Maximiliano Urruti in the 28th minute after picking up an apparent injury.
The 2015 U17 World Cup winner returned to Montreal Impact for a second loan spell in the January transfer window.
Montreal Impact will host Deportivo Saprissa at the Olympic Stadium in the second leg next Wednesday, February 26.
Ifeanyi Emmanuel
Photo Credit : impactmontreal.com