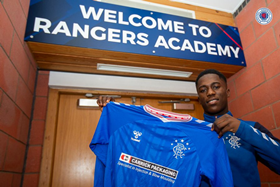 Scottish Premiership giants Glasgow Rangers have officially announced the capture of former Nigeria U17 invitee Malcolm Ebiowei.
The attacking midfielder had been on the lookout for a new club following his release by English Premier League side Arsenal last October and had attracted interest from West Ham.
In his first words as a Rangers players, Ebiowei told Rangers TV : "I'm delighted to have signed for this great club.

"I know it's very big and happy to see what the future holds. The fanbase and the fans (attracted me to Rangers).
"I've heard it is one of the biggest clubs and I've seen the fans on multiple videos. I love it.

"I've seen that Steven Gerrard likes to bring up the youths if they work hard and I'd like to take that chance."
Ebiowei trained with the Nigeria U17 National Team before the 2019 U17 World Cup and was included in the provisional squad list for the tournament in Brazil.
Ifeanyi Emmanuel
Photo Credit : rangers.co.uk