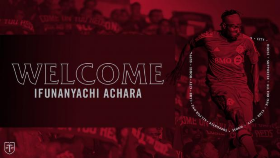 Major League Soccer outfit Toronto FC have officially announced the signing of Enugu-born Nigerian striker Ifunanyachi Achara on undisclosed terms.
The 22-year-old rookie was offered a contract by the Canadian team after a brilliant preseason that saw him score three goals in four appearances for Toronto.
He was selected as the number 25 overall pick in the 2020 MLS Super Draft and previously spent four seasons at Georgetown University.
"Achara has had a terrific preseason. He works hard, is dynamic offensively and has a great way about him where he fits very well within the group," Toronto FC General Manager Ali Curtis told the club's official website.
"We’re excited about adding him to the team as we feel he has a lot of potential."
Achara joins United States youth international of Nigerian descent Ayo Akinola, Jozy Altidore and Patrick Mullins as the four strikers on Toronto's roster for the 2020 season.
Ifeanyi Emmanuel
Photo Credit : torontofc.ca