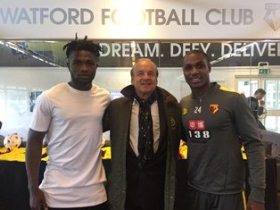 Watford striker Isaac Success has spoken of his happiness at Odion Ighalo's move to Manchester United in the January transfer window.
The two players know each other from a long way back as they have represented Granada, Watford and the Super Eagles and they both hail from Edo State in Nigeria.
Touted as one of the exciting teenagers in Africa back then, Success was brought in by Granada in 2014 as a ready replacement for Ighalo who was on his way to Watford and the same thing happened again in the summer of 2016 when the Hornets moved for the BJ Foundation product to understudy the former Lyn Oslo man ahead of a potential departure from the club.
Ighalo and Success will put aside their friendship and their mentor-mentee relationship for at least ninety minutes when Watford trade tackles with Manchester United in the Premier League on Sunday.
"I'm so pleased for him. He's always wanted this and it's finally happened," said Success to Watford's official website.
"When he finishes his career he'll be able to look back and say, ‘I did it. I finally made it to where I wanted to get to.’
"He messaged me straight away saying, ‘I'm back, I'm back.’ He's so happy there and ready to start working for the team and see what he can achieve there.
"He's a very hard worker and waited so patiently for this opportunity. He's getting what he deserves".
Odion Ighalo is represented by Atta Aneke, while Ladi Salami, who is an associate of the Norwegian-based Nigerian agent, handles the affairs of Isaac Success as well as another Watford player Tom Dele-Bashiru.
Ifeanyi Emmanuel