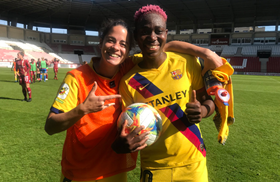 Super Falcons captain Asisat Oshoala showed how influential she is for Barcelona after netting a hat-trick for the Catalonia side in their 6-0 demolition of Logroño in a Spanish Primera División Femenina match at Estadio Nuevo Municipal Las Gaunas on Saturday afternoon, allnigeriasoccer.com reports.
The former Arsenal and Liverpool striker now has her longest scoring streak since moving to Europe, netting in her sixth consecutive game in all competitions.
Oshoala's previous personal best which she equaled last weekend in a 7-0 win vs Sporting de Huelva was scoring in five consecutive games.
The African Player of the Year began her current streak on February 1 and since then she has registered her name on the scoresheet an incredible eleven times.
Having set up Alexia Putellas for Barcelona's second goal at minute 34, Oshoala had to wait until the 54th minute before grabbing her first goal against Logroño, she got her second of the game in the 70th minute before wrapping up the scoring a minute before the game ended, ensuring she would go home with the match ball.
Thanks to her hat-trick that saw her take her tally to 20 goals in the league, she is now level with Barcelona teammate Jenni Hermoso at the top of the scoring charts.
Ifeanyi Emmanuel
Photo Credit : fcbarcelona.com