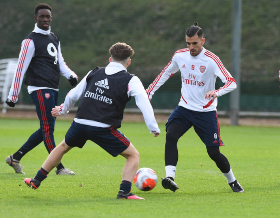 Teenage Nigeria-eligible starlet Folarin Balogun has apparently been named in Arsenal's provisional squad list for their Premier League clash against Everton this evening, allnigeriasoccer.com reports.
Arsenal have published training photos on their official website, and the prolific striker was pictured training with the Gunners first teamers at London Colney on Saturday afternoon under the guidance of manager Mikel Arteta.
Balogun was also called up to first team training by the Spanish football tactician ahead of their Europa League round of 32 match against Olympiakos but was left out of the traveling group to Athens.
An influential member of Arsenal's U23 squad, the 18-year-old is behind the likes of Alexandre Lacazette, Pierre-Emerick Aubameyang, Gabriel Martinelli and Eddie Nketiah in Arteta's pecking order of strikers.
With the Gabonese, Frenchman and Englishman all spotted in the final workout, the chances of Balogun making the matchday squad for the first time in the Premier League are very slim.
He has appeared in 14 matches for Arsenal U23s in the Premier League 2 this term and has been directly involved in 12 goals (8 goals, 4 assists).
In-form winger Bukayo Saka is in contention to play his 30th match in total for the first team vs Everton, having participated in the final workout yesterday.
Ifeanyi Emmanuel
Photo Credit : arsenal.com