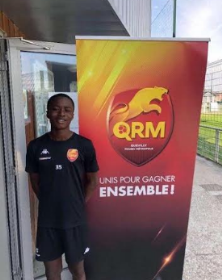 Quevilly Rouen Métropole wonderkid Daniel Akinleye has revealed that he wants to follow in the footsteps of Odion Ighalo and play for Manchester United in future.
The prolific 2006-born attacker has been identified as one of the most exciting teenagers on the books of a foreign club every Nigerian fan must keep an eye on and he has already started drawing interest from Premier League teams, namely Crystal Palace and Aston Villa, despite his young age.
Daniel comes from a footballing family, with his two older siblings Akinola and Remi Akinleye also involved in the sport.
"My dream club where I wish to play for in future is Manchester United like Odion Jude Ighalo, " said Akinleye to allnigeriasoccer.com.
"My qualities as a striker : speed, strong, technique. I need to improve my left foot, my finishing in front of goal and maturity in my game.
"I model my game after Romelu Lukaku because he is strong, I like his technique and he scores every time!"
Born in France to Nigerian parents and eligible to represent both countries, Akinleye revealed that he has not yet made a decision on his international future.
"I was born in France but my parents were born in Nigeria. I don't know where my international future lies but when the opportunity comes I will see what is best for me and my family, " he concluded.
Ifeanyi Emmanuel