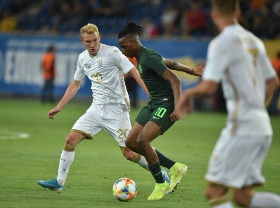 Super Eagles midfielder Joe Aribo showed off his goal scoring skills for Rangers in a 2-2 draw with St. Johnstone in the Scottish Premiership on Sunday and thus, received a thumbs up from manager Steven Gerrard post-match.
The Gers No. 17 made the most of a Florian Kamberi's neat pass into the box in the 71st minute to beat Alexander Clark, bringing the scoreline to 2-1 in the process.
Three days ago, Aribo was on the scoresheet as Rangers edged an Europa League game versus Sporting Braga, and Gerrard has opined his combination with Kamberi could have been the biggest of their performance at McDiarmid Park today but for the late goal they let in.

"It has happened too many times now. We keep shooting ourselves in the foot by conceding silly, silly goals and we forgot the real good, strong basics of defending.

"We should be talking about those two players [Kamberi and Aribo] being superstars for Rangers today but unfortunately but everyone's going to criticise us on a poor defensive showing."

Barring a last ditch injury, it is a forgone conclusion that the former Charlton Athletic starlet will be named to the Super Eagles squad to face Sierra Leone in the AFCON qualifying double-header next month.

Aribo's other two goals for Rangers in the top flight had come against Hibernian and Livingston.