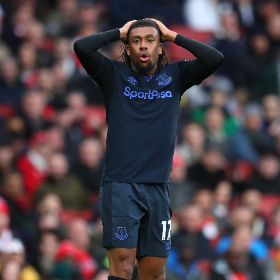 Hale End Academy product Alex Iwobi received a standing ovation from the Arsenal fans on his return to the Emirates Stadium for the first time since he swapped the north London club for Everton in the closing hours of the summer transfer window, allnigeriasoccer.com reports.
On a personal level, the Nigeria international ended his Arsenal career on a high note, scoring in his final game as they were beaten by Chelsea in the final of last season's Europa League.
Iwobi first trained with Arsenal at the age of six, rising through the ranks before making his first team debut against Sheffield Wednesday during the 2015-2016 season whilst still a teenager.
The 23-year-old was applauded by the Gunners faithful as he made way for Bernard with half an hour remaining.
The Super Eagles playmaker had two chances he should have buried with his side leading 1-0 and was one of the Everton players at fault for the Gunners' equaliser when he failed to track the run of Bukayo Saka in the build-up to Eddie Nketiah's goal.
In the reverse fixture back in December, Iwobi lasted only 11 minutes on the pitch after suffering a hamstring injury that kept him on the sidelines for six weeks.
Ifeanyi Emmanuel
Photo Credit : arsenal.com