...the complete Nigerian football portal
Subscribe
Iheanacho : Should Leicester Have Been Awarded A Penalty Vs Man City? Ex-EPL Referee Has His Say
Published: February 25, 2020 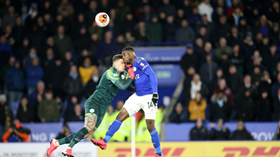 Former Premier League referee Dermot Gallagher has opined that referee Paul Tierney and VAR official David Coote made the right call by not awarding a penalty to Leicester City during the first half of their 1-0 loss to Manchester City on Saturday evening, saying the collision between Ederson and Kelechi Iheanacho was inevitable.
The Manchester City goalkeeper clattered Iheanacho in the area leaving the striker needing treatment.
And the Nigeria international had to make way for Harvey Barnes at halftime based on the advice of the Foxes medical team.
In a review of the key refereeing decisions from the weekend matches, Gallagher told Sky Sports : "I just think this is inevitable there's going to be a clash.
"When you see the ball come in, they've both got their eyes on the ball. It actually hits Iheanacho on the shoulder, and as they both jump for it it's inevitable they will collide."
Iheanacho failed to complete a Premier League match for the ninth time in the current campaign against Manchester City.
Igho Kingsley
Photo Credit : lcfc.com