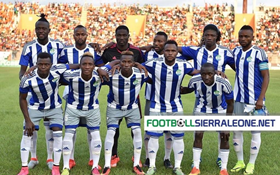 Nigeria and Sierra Leone face off in a double-header next month, in the race for next year's AFCON qualification, and it is fitting to evaluate the latest rivals, and the diverse facets facing up to this game.

Most of the Super Eagles players are unarguably enjoying the best of the fortunes with their clubs in Europe, but what does the challenge of the Leone stars pose for them in this clash?

Strengths: Sierra Leone might not be one of the continent's footballing giants, never featured in the biggest of international football that is the World Cup and failed to get past the group stage in their only two appearances (1994 and 1996) at the Nations Cup, but it must be said that they have evolved in recent years.

Due to their defensive strengths, they are a side that like to play behind the balls, sitting deep to soak up pressure, as well as trying to counter-attack rivals on the break.


As a result of their compact set-up, they are not particularly likely to be caught out easily by aerial balls, and teams will have to bide their time to break them down.
Weaknesses: On this front, they do not boast the best of talents. They can buckle under sustained pressure from a bigger side like the Super Eagles, as was shown with their loss to Benin last year.

The lack of experience of football at the highest of levels is another factor that plays against them.

Star players: With the country trying to blood in the best of their talents plying their trade all over Europe, Queen Park Rangers Osman Kakay joins FC Zürich's Umaru Bangura and St. Pölten's George Davies in the list of their growing stars bidding to do the West African nation proud by landing their first AFCON qualification since 1996.