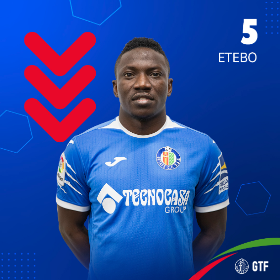 Stoke City loanee Oghenekaro Etebo will certainly not make his European debut this season, allnigeriasoccer.com understands.
It has come to light that the Nigeria international was not included in Getafe's squad list for the knockout phase of the Europa League, hence his omission from the provisional roster to face Ajax Amsterdam on Thursday.
A UEFA regulation states that clubs can register a maximum of three new players and the overall limit of players on List A is 25.
Getafe manager José Bordalás has named two new recruits in the form of ex-Nottingham Forest central defender Chema and Palmeiras loanee Deyverson in the updated squad list submitted to UEFA at the close of the January transfer window.
Since completing his move to Getafe on January 8, Etebo has appeared in five official matches, with four of them coming in La Liga.
The former Warri Wolves player did not get a taste of European action during his spell at UD Las Palmas and CD Feirense.
Ifeanyi Emmanuel
Photo Credit : getafecf.com