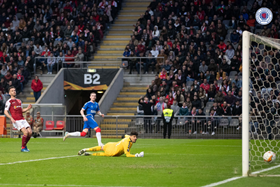 A host of European clubs sent their representatives to the Estádio Municipal de Braga in Portugal to monitor proceedings during the Europa League round of 32, second leg match between Sporting Braga and Glasgow Rangers on Wednesday evening.
The Scottish Premiership side made it through to the last 16 after a 1-0 win, with Super Eagles midfielder Joe Aribo and Liverpool loanee Sheyi Ojo entering the game as substitutes in the 72nd and 78 minutes respectively.
The official list of scouts obtained by STV journalist Ronnie Charters revealed that Everton, Leeds United, Southampton, Manchester United, Brighton & Hove, Crystal Palace and Chelsea talent spotters were in attendance for the game.
Strasbourg, Bordeaux, Montpellier, Monaco and Nice were the French Ligue 1 clubs represented; Borussia Dortmund, Eintracht Frankfurt, FSV Mainz, Wolfsburg and Cologne came from Germany while Levante, Alaves, Valencia, Sevilla and Mallorca came from Spain.
AC Milan, AS Roma and Atalanta scouts were not left out of the spying mission to Braga.
Both Liverpool loanee Sheyi Ojo and Aribo are represented by the same agent, Emeka Obasi's Elite Project Group, who has close links to some of the clubs in attendance not limited to Everton, Leeds United, Chelsea, Bordeaux and Borussia Dortmund
The England U20 World Cup-winning winger is contracted to Rangers until the end of the season while Aribo has a deal until June 2023.
Ifeanyi Emmanuel
Photo Credit : rangers.co.uk