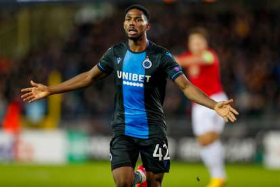 Club Brugge manager Philippe Clement and defender Simon Deli have rued the absence of Emmanuel Dennis for Thursday night's Europa League round of 32 second leg clash against Manchester United at Old Trafford.
The Nigeria international has not traveled with the Brugge squad to the United Kingdom after picking up an injury in last weekend's league match vs Sporting Charleroi.
Apart from Dennis, Club Brugge are also without their captain Ruud Vormer and defensive midfielder Eder Balanta.
Speaking to reporters at Wednesday's pre-match press conference, Deli said : "The absence of Vormer, Balanta and Dennis will be felt because they are important players.

"We will certainly miss them but we can handle this as a team. This will be a special match, one of the highlights in my career."
Club Brugge coach Clement added : "The absence of Vormer, Balanta and Dennis makes it an even bigger challenge that we thought.

"Whether Diatta is ready for the match remains to be seen, we will make that decision tomorrow."
To stand a chance of progressing to the last sixteen of the Europa League, Club Brugge must score in tonight's game and have to avoid conceding a goal.
Igho Kingsley
Photo Credit : clubbrugge.be