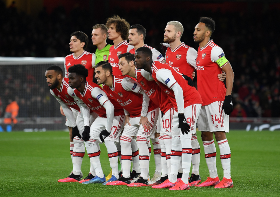 Arsenal began Thursday night's Europa League round of 32 clash against Olympiakos with an advantage after winning the first leg 1-0 at Stadio Georgios Karaiskáki in Piraeus last week, allnigeriasoccer.com reports.
However, it's Olympiakos who are through to the last 16 following a shock 2-1 win at the Emirates Stadium.

Anglo-Nigerian winger Bukayo Saka started once again at left-back and played the entirety of the game.

Pape Abou Cisse opened the scoring for the Greek side on 53 minutes, which eventually sent the game to extra-time.

Arsenal captain Pierre-Emerick Aubameyang equalised in the 23rd minute of extra time, only for Youssef El Arabi to restore Olympiakos' one-goal lead on the night in the 120th minute.

Aubameyang turned from hero to zero when he squandered the chance to level the tie and keep alive Arsenal's hopes by missing a sitter in the final minute of injury time.

Arsenal will now concentrate on qualifying for next season's European competitions via the FA Cup and finishing among the top six teams in the Premier League.