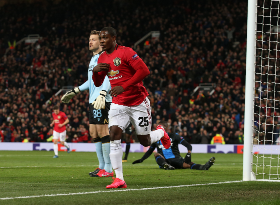 Odion Ighalo has been labelled a natural striker by Manchester United coach Ole Gunnar Solskjaer after the deadline day signing from Shanghai Shenhua opened his goalscoring account against Club Brugge in a Europa League round of 32 fixture at Old Trafford on Thursday night.
Eleven minutes before halftime, Ighalo showed his predatory instincts, spinning quickly then got in front of his marker and tapped the ball in after receiving a pass from Juan Mata to give United a crucial 2-0 lead.
Pioor to netting his maiden goal, the new Manchester United number 25 was unfortunate not to put the ball in the back of the net in back-to-back Premier League matches against Chelsea and Watford.
"I think, as a fellow striker myself, I know important that first goal is and he’s been close a couple of times," said Solskjaer to United official website.
"You can see he sniffs goals, he wants to be there, where it sometimes hurts.
"That goal, he was sharp in his head and, as that ball is played over to Juan, he spins and was on the six-yard line when Juan puts it there. That’s a natural striker."
Igho Kingsley
Photo Credit : manutd.com