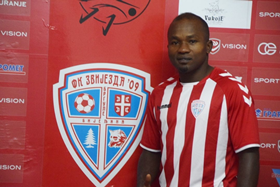 With a statement on their official webpage, Bosnia and Herzegovina Premier League club FK Zvijezda 09 have announced the capture of Nigeria international Ejike Uzoenyi.
The diminutive winger has has put pen to paper on a contract until May 2021, thus bringing to a conclusion his search for a new club.
Uzoenyi had been without a club since the summer of 2018 after severing his ties with Ajax Cape Town.
The 31-year-old was a member of the Super Eagles squad to the 2013 Africa Cup of Nations and got a taste of action against Mali in the semifinals of the competition held in South Africa.
The following year, the former Enugu Rangers man won the Most Valuable Player award at the Africa Nations Championship and debuted in the World Cup, coming off the bench for the last 15 minutes of a 1-0 win vs Bosnia.
Uzoenyi's other clubs include Enyimba, Rennes, Mamelodi Sundowns and  Bidvest Wits.
He is eligible to make his competitive debut for FK Zvijezda 09 in tomorrow's league game against Zeljeznicar.
Ifeanyi Emmanuel
Photo Credit : fkzvijezda09.com