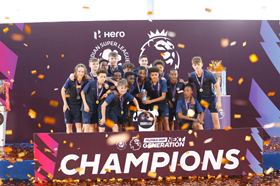 Chelsea were crowned champions of the PL-ISL Next Generation Mumbai Cup on Friday, February 28 following their 4-0 thrashing of Bengaluru FC in their final game of the tournament staged at the Reliance Corporate Park football ground in Navi Mumbai, allnigeriasoccer.com reports.
The Young Blues finished the competition with a hundred percent record, having won five consecutive matches.
In their first game, they beat Reliance Foundation Youth Champs 3-1, followed by victories against Manchester United (1-0), Southampton (2-0), FC Goa (5-0) and Bengaluru FC.
The Chelsea U14s are managed by the brilliant Nigerian coach Hassan Sulaiman and captained by Chinonso Chibueze.
A graduate of University of the Arts, London College of Communication, Sulaiman has been an academy coach at Chelsea since 2008.
It is understood that he is dreaming of managing the Golden Eaglets and Flying Eagles in the near future.
Manchester United and Southampton also participated in the PL-ISL Next Generation Mumbai Cup.
Ifeanyi Emmanuel
Photo Credit : premierleague.com