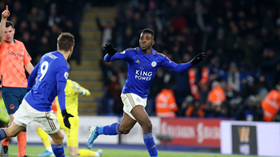 With Jamie Vardy ruled out of the ongoing game between Norwich City and Leicester City at Carrow Road, manager Brendan Rodgers has picked Kelechi Iheanacho as the lone striker.
The Nigeria international has been used primarily as a substitute for Premier League games and made the most of the chances he was given after coming off the bench.
Speaking ahead of the game, former Manchester United and Leicester City midfielder Robbie Savage is backing Iheanacho to deliver for the Foxes in the absence of Vardy.
"He came for a large transfer fee from Manchester City, he hasn't had the opportunities but when he's got them from Brendan Rodgers off the bench, remember that last-minute goal against Everton at the King Power then he scored in the semifinal of the Cup, so he can score big goals important times," Savage said on Premier League Productions.

"Obviously I don't think that they play together, it's either Vardy or Iheanacho the way they play so that goes against him.

"But with Vardy being out, that's another opportunity for him and every time he's had an opportunity he's taken it."
Iheanacho has been involved in an impressive 12 goals (8 goals, 4 assists)from 15 appearances across all competitions so far this season.
Ifeanyi Emmanuel
Photo Credit : lcfc.com