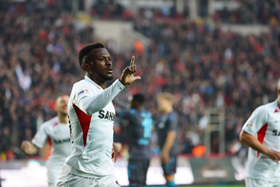 Allnigeriasoccer.com's round-up on the Nigeria-eligible players who were on target for their clubs in matches across Europe on Saturday, March 7.
We begin in the Scottish Premiership where Marios Ogboe netted his seventh goal in all competitions as Hamilton Academical claimed a 1-0 win over  Kilmarnock at Fountain of Youth Stadium (Hamilton) .
A minute before full time, the Greek-Nigerian striker blasted home a penalty to secure three points for the home team, taking his tally to 11 goals from 51 games since joining Hamilton Academical from OFI in January 2018.
In the Turkish Super Lig, out of favour Super Eagles striker Olarenwaju Kayode netted a crucial equaliser for Gaziantep FK in the 53rd minute as they were held to a 1-1 draw by a Trabzonspor side containing John Obi Mikel and Anthony Nwakaeme.
The Shakhtar Donetsk loanee has had a hand in 16 goals (9 goals, 7 assists) from 23 appearances in all competitions this term.
In Scandinavia, John Junior Igbarumah has opened his goalscoring account for the 2020 season and it came in Dalkurd's 3-1 win over  Sandviken in the Svenska Cupen.
Igbarumah scored in the second minute of first half stoppage time and doubled Dalkurd's advantage.
Ifeanyi Emmanuel
Photo Credit : GaziantepFK.org