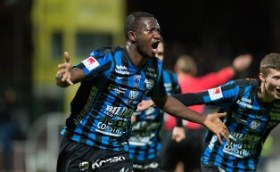 Allnigeriasoccer.com understands that Swedish Allsvenskan newcomers Mjallby AIF are on the verge of announcing the signing of Nigerian striker Moses Ogbu.
Ogbu, who also holds a Swedish passport, has already put pen to paper on a one-year contract, keeping him at Mjallby AIF until the end of the 2020 season, and only an official confirmation is being awaited.
The 29-year-old has joined Mjallby as a free agent, having terminated his contract with English Football League club Grimsby Town by mutual consent in January 2020.
He cited the need to be with his family as the main reason behind his decision to quit The Mariners before the expiration of his contract which was due to run out at the end of this season.
A popular figure in Swedish football, Ogbu was captain of IK Sirius in his final season with the club and has also worn the colours of Jonkopings Södra and Saudi Arabian club Al-Ain.
He is a product of FC Dynamo in Lagos.
Ifeanyi Emmanuel
Photo Credit : siriusfotboll.se