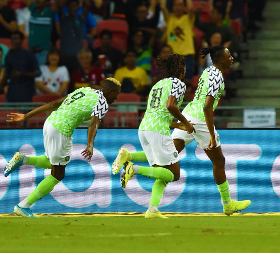 It is the turn of Glasgow Rangers star Joe Aribo to answer random quick-fire questions from the Super Eagles Media Team via YouTube about his dress sense, football, music taste and food.
Aribo has forced his way into Gernot Rohr's reckoning after starring in back-to-back friendly matches against Ukraine and Brazil and is in line to win his fifth cap in this month's Africa Cup of Nations qualifier against Sierra Leone in Asaba.
Revealing who he prefers between Lionel Messi and Cristiano Ronaldo, Aribo went for the Barcelona captain, saying "Messi, no brainer".
The 23-year-old picked casual over corporate wears, trophy over money, World Cup trophy over winning the UEFA Champions League, and chose fried plantain as his favourite food.
Asked to name the top five acts on his playlist, Aribo went for Drake, Meek Mill, Future, Burna Boy and Wizkid.
Despite Aribo's religious upbringing, the former Charlton Athletic midfielder hinted at being a Marlian after revealing that he sang 'Japa' by Naira Marley during his Super Eagles initiation.
He chose London over Lagos and explained that he has not spent much time in Nigeria's commercial capital.
Igho Kingsley