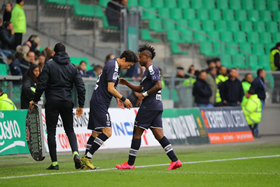 Bordeaux and Saint-Etienne shared the spoils with a 1-1 draw in a French Ligue 1 game staged at Stade Geoffroy Guichard on Sunday afternoon, allnigeriasoccer.com reports.

Former Sunderland starlet Maja was named in the starting line-up as first choice striker Jimmy Briand is still recovering from injury while Kalu is back in favour after his well documented problems.

On 65 minutes, Bordeaux opened the scoring through Josh Maja with Kalu involved in the build-up to the goal.

The Bordeaux number ten jinked his way past a defender and managed to cross into the penalty area and an attempted clearance fell into the path of Maja, who fired home from close range.

Bordeaux's lead lasted only three minutes though as Denis Bouanga restored parity for the home team.

After 28 matches in the division, Maja is Bordeaux's joint second top scorer with six goals to his name, including a hat-trick against Nîmes Olympique in December.