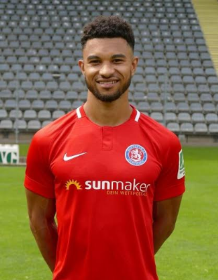 Wuppertaler SV defender Noah Salau has pledged his international future to Nigeria over his country of birth, Germany.
The 23-year-old was born in Haan, North Rhine-Westphalia, Germany to a Nigerian father and German mom, and turned out for the youth teams of Fortuna Düsseldorf and Wuppertaler SV, then played for Turu Düsseldorf and FC Monheim, before returning to Wuppertaler SV in 2019.
Salau is close pals with German-born goalkeeper Maduka Okoye who has pledged his international allegiance to Nigeria and has been named in the latest Super Eagles squad ahead of Africa Cup of Nations qualifiers against Sierra Leone.
"I was born in Germany, my dad is Yoruba from Kwara State and my mother is German, " said Salau to allnigeriasoccer.com.
"It's my dream to play for Nigeria since I was little. My dad gave me Yakubu and Kanu's jerseys when he visited Nigeria.
"I watch Nigerian football and the players are very good when they are representing the national team.
"One of my friends is in the national team, Maduka Okoye, who played with my younger brother at Bayer Leverkusen.
"I want to represent my country even though I wasn't born there, my dad has told me good things about the country, I want to make my dad and family proud.''
Salau has cited Manchester City and England fullback Kyle Walker as his role model and picked former Leicester City striker Ahmed Musa as his favourite player in the Super Eagles.
"I am a fullback, can play from the left or right. I am very strong and fast.
"I model my game after Kyle Walker from Manchester City. At the moment my favourite Nigerian player is Ahmed Musa, he gives his all when he plays for the Super Eagles, " Salau concluded.
Ifeanyi Emmanuel