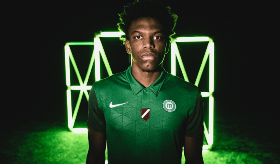 Through a statement on their official website, Latvian Virsliga side FK Metta have announced the signing of highly-rated Brazilian-Nigerian center back Franklin Joseph Tochukwu.
The financial terms and duration of contract signed by the 21-year-old defender have not been disclosed by FK Metta.
São Paulo-born Tochukwu was on the books of SC Corinthians for seven years before switching to Croatian top-flight team NK Lokomotiva in 2019.
A pacy and aggressive central defender, he captained the youth team of SC Corinthians during his time with the club.
He is in line to make his competitive debut for FK Metta when they tackle Spartaks Jurmala in their league opener on Saturday, March 14.
2015 U17 World Cup winner Lukman Zakari began his professional career with FK Metta and is spending the remainder of this season on loan at Real Betis., with a purchase option included in the deal.
Ifeanyi Emmanuel
Photo Credit : fsmetta.lv