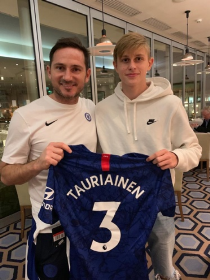 Chelsea have signed promising Finnish midfielder Jimi Tauriainen, his former club FC Wild have announced.
The three-year deal Tauriainen penned with the Premier League club shall come into effect on July 1, 2020.
According to the reliable Scouts In Attendance, the highly-rated teenager attracted interest from over twenty clubs, including Barcelona, Borussia Dortmund, Inter Milan and Juventus, but opted to join Chelsea.
Tauriainen has played six games for Finland's U16 national team, scoring four goals, all of them coming against Sweden in two friendlies.
He comes from a footballing family - his brother plays for the U19 team of SC Freiburg and his father played internationally for Finland before hanging up his boots.
Jimi Tauriainen currently wears the colours of the U19 team of HJK Helsinki.
Igho Kingsley
Photo Credit : fcwild.fi