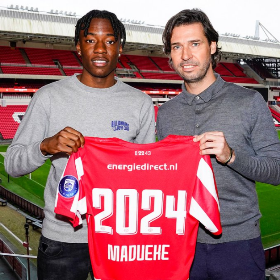 Former Tottenham Hotspur U16 captain Nonso Maduke has ended speculation over his future by inking a new deal with Dutch Eredivisie giants PSV Eindhoven.
The new contract signed by Madueke on Tuesday when he turned eighteen years will keep him at PSV until the summer of 2024.
His former contract with PSV would have expired at the end of the 2020-2021 season if it was not extended.
Commenting on his new deal, Madueke said : "I’ve had a wonderful time here. I am grateful for my youth coaches who have helped me to get my first minutes of first team action.

"I’m happy to see my continued progress rewarded with a new contract. Getting this contract gives me even more motivation to demand the best of myself every day again."
He added : "This is a very special day for me. Since I arrived here, I have noticed PSV is the best club to develop myself and I never doubted to sign a new contract.
"PSV is a massive club and I look forward to developing myself further and gain successes".
Madueke has made four appearances for PSV's first team, logging 116 minutes and was a non-playing substitute on six occasions, including the Europa League qualifying round vs Apollon Limassol.
Igho Kingsley
Photo Credit : psv.nl