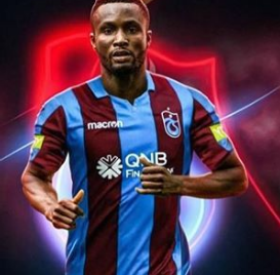 Turkish Super Lig club Trabzonspor announced on Tuesday that they have mutually agreed to part ways with former Chelsea star John Obi Mikel.
Though no reason was given for the termination of the agreement, the Super Eagles legend had criticized the decision of the Turkish Football Federation not to postpone the Super Lig in the wake of the coronavirus outbreak.
Mikel was an unused substitute as Trabzonspor were held to a 1-1 draw by Istanbul Basaksehir on Sunday, an obvious sign that all was not well between club and player.
"The professional football player agreement between our club and John Obi Mikel on 30.06.2019 start date of 31.05.2021 has been mutually terminated," Trabzonspor said in a statement.
"With the mutual termination agreement, the football player has given up all his forward-looking receivables."
The 32-year-old Mikel departs Trabzonspor after making 27 appearances in all competitions, including five in the group stage and qualifying rounds of the Europa League.
The 2013 Africa Cup of Nations winner was on a salary of 1.5 million euros per season at Trabzonspor.
Ifeanyi Emmanuel