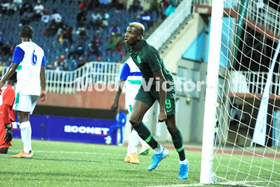 Victor Osimhen is being tipped to become the most expensive player sold by French Ligue 1 club Lille in the future.
According to Le 10 Sport, Lille will most certainly sell the Nigeria international for a huge profit, with several European giants not limited to Barcelona, Real Madrid, Chelsea and Liverpool credited with an interest in the striker.
Arsenal paid 80 million euros for the services of Nicolas Pepe, making him the most expensive player sold by Lille and Osimhen's sale could better that fee.
The 21-year-old joined Lille in August 2019 with Sporting Charleroi receiving €12 million for agreeing to terminate his contract before expiration.
The French publication has predicted that Osimhen could be sold for around 100 million euros and it remains to be seen the club that will win the race for his signature.
The 2015 U17 World Cup Golden Boot winner hasn't disappointed since transferring to Lille, scoring 18 goals in all competitions and has set up six others in 38 appearances across all competitions.
He has also impressed on the international scene, with four goals in four matches since the conclusion of the 2019 Africa Cup of Nations.
Ifeanyi Emmanuel