...the complete Nigerian football portal
Subscribe
WBA's Ajayi On When He Chose To Play For Nigeria Over England; Not Getting Neymar's Shirt
Published: March 19, 2020 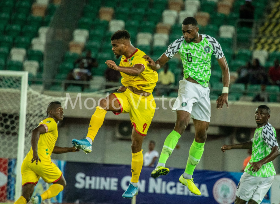 In-form West Brom central defender Semi Ajayi has revealed that he decided to play for Nigeria over his country of birth, England while he was still a teenager.
The former Arsenal U23 captain was a member of the Flying Eagles squad to the Toulon Tournament in France, playing in games against Belgium, Brazil and Portugal but was not selected in the final roster for the 2013 FIFA U20 World Cup in Turkey.
Born in London to Nigerian parents, Ajayi has insisted that his international allegiance was always with Nigeria and he didn't consider playing for England.
"The decision was made a long time ago. I decided to play for the Under-20s when I was 19 and the goal was always to play for the first team," Ajayi told West Brom's official website.
"As a youngster, we would go there every two years to visit my mum and dad’s families... it was nice to meet my grandparents and all my cousins.
"It’s a really nice country; mum’s family is in Lagos. She makes Nigerian food at home but it’s different when you go out there and get the real thing. The ingredients are that bit fresher I think. It’s lovely food; I really enjoy it... "
Ajayi has forced himself into the Super Eagles starting line-up following his brilliant performances for the Baggies and was one of the impressive players as the national team were held to a 1-1 draw by a Brazilian team containing Neymar, Dani Alves, Philippe Coutinho and Roberto Firmino.
The 26-year-old has admitted that he was disappointed not to get Neymar's shirt after the game staged at the National Stadium in Singapore five months ago.
"The only disappointment was not getting Neymar’s shirt. But I don’t think he was in a very good mood after the game.
"I asked at the end but it was already taken – I think the other lads in the team must spend the entire game asking him which is something I would never do. But I got Coutinho’s so I’m happy enough with that," he added.
Ajayi became cap-tied to Nigeria when he played the last sixteen minutes of an Africa Cup of Nations qualifier against Seychelles in September 2018.
Igho Kingsley