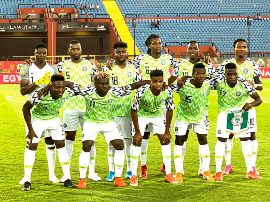 Godfrey Stephen was impressive as Isloch registered a 1-0 victory against Neman Grodno in their Belarusian Premier League opener on Saturday, March 21, allnigeriasoccer.com reports.
The Nigeria U23 international played the full game as a goal from Momo Yansane in the 88th minute secured all three points for the home team.
A product of Gee-Lec Academy, Stephen was the most prolific Nigerian defender in the whole of Europe last term (top divisions only), ending the 2019 campaign with five goals for Isloch and set up four goals.
Only former PEC Zwolle right-back Kingsley Ehizibue, who tallied eight, provided more assists than Stephen last season.
A left-back by trade, the 19-year-old was not on the radar of the Flying Eagles coaches before the 2019 World Cup but was rewarded with a call-up to the Olympic squad for last year's U23 AFCON, where he started all the group matches.
If Stephen continues with his brilliant form, a transfer to a more glamorous league might be on the cards.
In the provisional Belarusian Premier League standings, Isloch are fourth. They face Smolevichy-STI in their next league game on April 2.
Ifeanyi Emmanuel