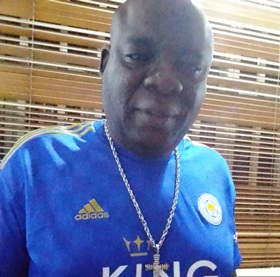 Former Nigeria Under-17 coach, Emmanuel Amuneke has landed in trouble after losing a case instituted against him by Dominic Egbukwu, a FIFA agent and former captain of Enyimba Football Club and French based agent, Oliver Noah of Noga Sports Management over the fraudulent transfer of Chidiebere Nwakali to Manchester City in 2014


The Ikoyi High Court has ruled that Emmanuel Amuneke should pay the maximum of N112 million (equivalent of $560,000) after been found guilty in a case of breach of contract in case number LD/766CMW/2015.
Dominic Egbukwu who addressed press in Ibadan after a free scouting football trials his club Sidos FC conducted at the playing ground of the Polytechnic Ibadan said soon his firm via the court order will take procession of the houses of Amuneke at the Festac Town having failed to pay the fine slammed on him by the court.


Egbukwu in his explanations said the case has been on since 2013 after the FIFA Under 17 World Cup, when Emmanuel Amuneke Academy fraudulently lay claim to be in the possession of the midfielder's (Chidiebere Nwakali) sporting rights, whereas Taye Academy were the bona fide owners, and issued a mandate to Egbukwu and his French partner to act on their behalf in negotiating a transfer to Man City as well as Marseille, Inter Milan, Arsenal and Monaco.
But the Former Tanzania manager failed to comply with the agreement reached with the two intermediaries and contacted Manchester City to call off negotiations with Noga Sports Management despite the mandate, which was for 15 days, yet to expire.

"Soon we shall seize some of his properties we have identified around Festac Town Lagos and put them up for sales because he could not provide the N112 million (equivalent of $560,000) slammed on him by the court which is our right in the aforementioned deal" said Dominic Egbukwu in Ibadan.
Olanrewaju Akanbi