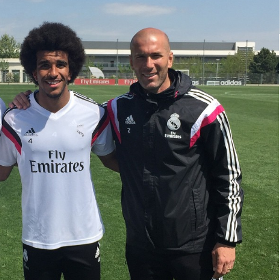 Super Eagles hopeful Derik Osede has been included in Marca's The 50 most promising players at La Fabrica at the start of the decade.
The celebrated Spanish sports publication spotlighted fifty players that had been tipped for stardom following their exploits at the Real Madrid Academy, starting from 2011, with Osede making the cut.
The 27-year-old now plies his trade at Spanish Segunda Division club CD Numancia, for whom he has made 22 league appearances this term, scoring two goals.
On Osede, the Madrid-based newspaper wrote : "A regular in the lower categories of the national team that was European champion at U19 and U20 levels, he spent 13 years in La Fabrica.
"After two seasons and 51 games with Castilla, and even a debut in the Santiago Bernabeu Trophy, Derik went to England and spent three seasons at Bolton Wanderers.
"He was without a team for a few months until Numancia came knocking."
As for the 50 most promising players at La Masia at the beginning of the decade, former Nigeria U23 international Godswill Ekpolo, who was a key member of Barcelona's UEFA Youth League-winning squad in 2014, did not earn a spot on the list.
Igho Kingsley
Photo Credit : instagram.com/derikosede