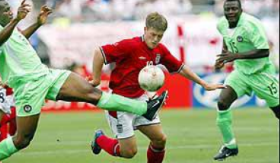 The Nigeria Police have recovered the Toyota Camry sedan stolen at gun-point from former Nigeria international midfielder Justice Christopher while he was attempting to enter the gates of one his estates last week in Jos, the Plateau State Capital.

The car was recovered by the Police in far away Jigawa State.

Recall that last Thursday, the former Royal Antwerp of Belgium and Levski Sofia of Bulgaria defensive midfielder returned from a birthday party of held in honour of another former footballer, Ugo Ayaya in Rayfield area of Jos and went straight to one of his properties, a hotel facility known as Rachaels situated in Hwolshe area of Jos when he was brutalized by the hoodlums who made away the car alongside several other personal belongings.

While speaking with allnigeriasoccer.com in Jos, Christopher thanked the media as well as the Nigeria Police for doing a beautiful job.

Justice Christopher shot into international reckoning after he captained the Nigeria National Under-20 team, the Flying Eagles to the 2001 Africa Youth Championship in Ethiopia and thereafter was promoted to Nigeria's senior national team the Super Eagles.

He has since retired from active football but doing well in personal business as he now runs chains of estates including hotels management.