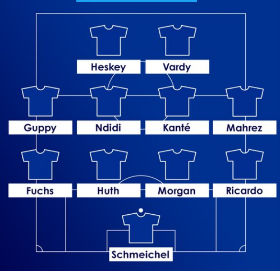 Leicester City fans have chosen their Premier League XI on the club's official Twitter page, with Wilfred Ndidi making the cut while Ahmed Musa, Kelechi Iheanacho and Ade Akinbiyi missed out.
Signed from Racing Genk in January 2017, the Nigeria international has made 130 appearances for the Foxes and has registered eight goals in all competitions.
In a 4-4-2 formation, Ndidi, who was voted into the squad ahead of Danny Drinkwater, Andy King and Muzzy Izzet, lined up in central midfield alongside N'Golo Kante.
Here's how fans reacted to the inclusion of Ndidi in the squad :
@MarceSP15 : 'I choose Muzzy but Wilf will be top class in some years... Real Madrid or Barcelona player level imo'.

@blindposes : 'Muzzy and either kante/ndidi - ndidi will go on to be a Leicester legend, kante was crucial in us winning league... Both deserve to be there but not at the expense of muzzy...'.

@Dunposting : 'Not many goals from Kante and Ndidi. I would have found room for Muzzy.'

@TomSykes_2408 : 'Lots of creativity in that central midfield'.

@Dynaf8 : 'Ndidi the best midfielder with a great tackle'.

@07SuperNerd : 'Right choice LCFC fans... Kante x Ndidi midfield is a blockbuster!!! Kante will do more of the box to box... Ndidi will sit. Solid duo.'

@himan4lyf : 'In Nigeria we call Ndidi pillar of Super Eagles. You have to respect this guy.'

@Richard13162222 : 'This is tough. Muzzy was a football hero of mine  Drinkwater had one amazing season alongside Kante, N'Didi is my current favourite player and has been since he joined. However Andy King had one titles with Leicester in 3 divisions, so for me he has to be the choice.'
Igho Kingsley