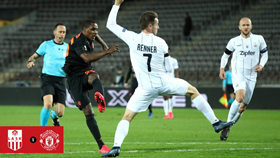 Odion Ighalo has won his first major individual accolade since transferring to Manchester United in January.
The official webpage of the Red Devils has announced the winner of Manchester United's Goal of the Month award for March 2020, with the former Nigeria international coming out on top.
Ighalo's stunning effort against LASK in a Europa League fixture on March 12 was voted the most eye-catching goal scored by a Manchester United player this month.
In the 28th minute, he controlled the ball three times before firing home a spectacular effort in off the underside of the bar from just inside the area to open the scoring for the Premier League team.
The 30-year-old finished first with 32 percent of the votes, followed by Scott McTominay (26 percent) and Bruno Fernandes (16 percent).
Ighalo's effort against Derby County, scored after 69 minutes,  had been in the running for the Goal of the Month but did not make the top three.
Igho Kingsley
Photo Credit : manutd.com
Copyright ANS